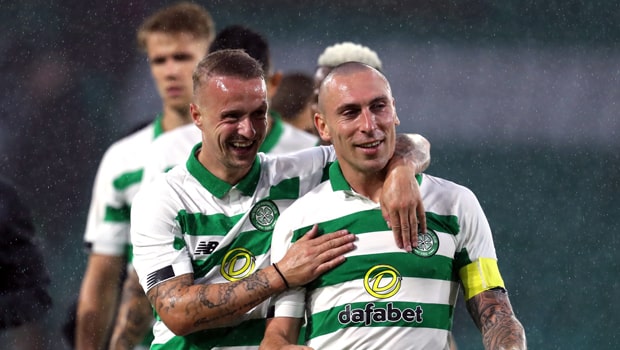 The long-serving Hoops midfielder is now 34-years-old and has passed the 500-appearance mark for the Scottish champions. Despite being in the twilight of a stunning career that has already yielded 20 major domestic honours in Scotland with Hibs and Celtic, Brown shows no signs of slowing down.

He was again leading by example as Celtic negotiated their opening Champions League qualifier against FK Sarajevo without fuss.

Lennon, who played against Brown in the Celtic midfield when he was a boy at Hibernian, has been paying tribute to the club captain and insists he’s very much central to his plans as the manager starts into a first full season in his second stint as boss at Parkhead.

“He is fit as a fiddle. He still covers the ground and reads the game brilliantly. I thought his play was very good. He is a safety valve for us. If he is on the ball, there is a calmness there. He also sees the danger on counter-attacks too. He had a great game in midweek and I don’t take that for granted,” said Lennon.

The Bhoys boss feels Brown has forged a fine midfield partnership with Callum McGregor and he had his own take on how the final years of his own playing career compare with those of his current captain.

“He has a really good sidekick now in Callum, they are a great combination and there is a good understanding between them. “I wouldn’t have had Broony’s legs,” admitted Lennon. “I’m cleverer obviously, but he covers the ground [better].”

Celtic face Kalju Nomme at home on Wednesday evening in the first leg of their second qualifying round, a game the Hoops are 1.04 to win.