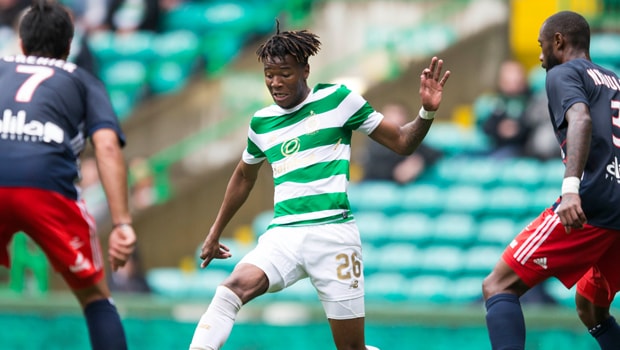 Kundai Benyu says he is confident of breaking into Celtic’s first-team next season if he takes on board the advice from manager Brendan Rodgers.

Zimbabwe international Benyu joined the Scottish champions last summer on a four-year deal but he struggled to make any real impact during his debut campaign at Parkhead.

The 20-year-old was shipped out on loan to Oldham Athletic in January for the second half of the season but he again failed to impress, playing in just four League One matches during his temporary spell.

Having returned to the Bhoys after his loan finished, the midfielder is now looking to catch the eye of Rodgers during pre-season and earn a place in the first-team squad.

Benyu was quoted as saying by the Zimbabwean Standard: “Given time, working as hard as I can in training and listening to the gaffer and his advice, I think I’ll be able to get in the team as much as I can.”

Benyu will have a challenge on his hands to become a regular first-team fixture next season with the likes of Scott Brown, Tom Rogic, Nir Bitton, Olivier Ntcham and Charly Musonda all ahead of him in the pecking order.

Celtic are firm 1.08 favourites to defend their league title next season whilst Rangers, who are managed by Steven Gerrard, are 9.00 to break the dominance of their rivals.

Rodgers and co, who have been drawn against Alashkert of Armenia in their opening Champions League qualifier, will be aiming to make even more history next term by doing the domestic treble for a third consecutive campaign.