John Hartson: Kieran Tierney must be ‘wrapped in cotton wool’ 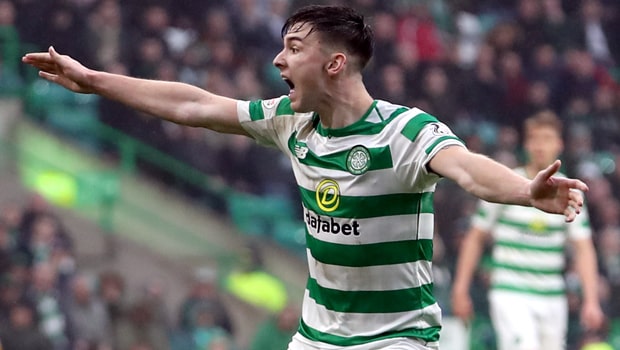 Former Celtic forward John Hartson has urged the Parkhead side to take care of Kieran Tierney amid fears his season is over.

The full-back sat out Sunday’s stalemate with Hibs at Easter Road and interim manager Neil Lennon has confessed Tierney may need an operation to sort out the persistent pelvic problems he’s been battling in recent months.

He will see a specialist this week about the pelvic and groin injury he had aggravated in the triumph against Rangers last month and may have to undergo surgery.

Next month’s Scottish Cup final against Hearts at Hampden Park might be the only remaining chance the 21-year-old has of seeing game-time this term.

Former Bhoys striker Hartson says the club should be very careful in handling their prized asset, with a long-term view required.

“He is such a huge player for Celtic, the main man really, so I understand that they will be desperate to get him on to the pitch whenever they can,” Hartson told the Evening Times.

“With Neil Lennon admitting at the weekend though that he may have to go under the knife to sort out the discomfort in his pelvis, it is only right now that they wrap him in cotton wool and make sure he is fit and raring to go for next season.”

Veteran Emilio Izaguirre has been deputising for Tierney but Lennon would dearly love to have the latter fit for the May 25 clash with Hearts at Hampden.

“He attacks every game and every training session at 100 per cent, and he is the type of boy who would run through a brick wall just to play for Celtic, but for his own good it is time for him to have a break,” added the Welshman.

“He can be a top player well into his thirties if handled correctly and he has to think about the long term.”

Celtic are 1.29 to beat Kilmarnock on Saturday, with Steve Clarke’s side 12.0 and the draw priced at 5.50 in Glasgow.