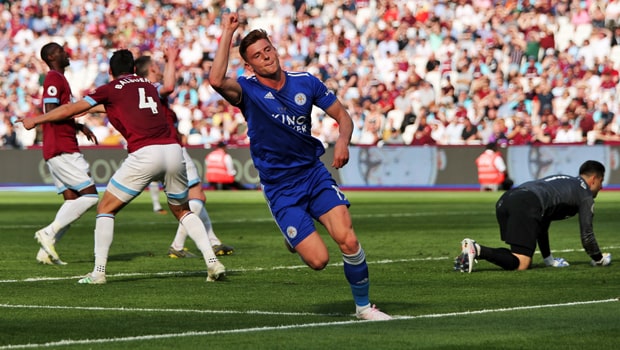 Having scored his first Leicester City goal in dramatic fashion to secure a 2-2 draw at West Ham on Saturday, Harvey Barnes wants to finish the season strongly.

Academy graduate Barnes was brought off the bench in the second half by manager Brendan Rodgers and, together with fellow replacement Kelechi Iheanacho, he had a positive impact before notching a 92nd-minute equaliser for the Foxes at the London Stadium.

The 21-year-old suggested his cool finish was a replica of goals he has scored in the past on loan at West Brom and, with three Premier League games remaining before Leicester break for the summer, he wants to build on his first goal.

“Obviously for me it was a great moment, I got my first goal in the Premier League and so late on in the game makes it even more special,” said the midfielder.

“I think with three games left this season now, hopefully it’ll give me and the team confidence.

“Late goals are always great for the team, sometimes it feels like a win, so for us these last few games will just be about finishing the season strong and, on a personal note from me, it’ll be the same.”

His effective cameo against West Ham won praise from Rodgers after the game. Leicester weren’t at their best in the opening 45 minutes but Barnes says he knew exactly what was required of him.

“Coming off the bench, you’ve just got to make a positive impact on the game and, for me, I thought I did that,” he added.

“It’s something that we spoke about, for us it’s just about making sure the performances are alright heading into next season.”

Leicester are next in action on Sunday when they entertain Arsenal at King Power Stadium. The Foxes are 2.75 to win, with the draw 3.60 and Arsenal 2.40 favourites to take home all three points.