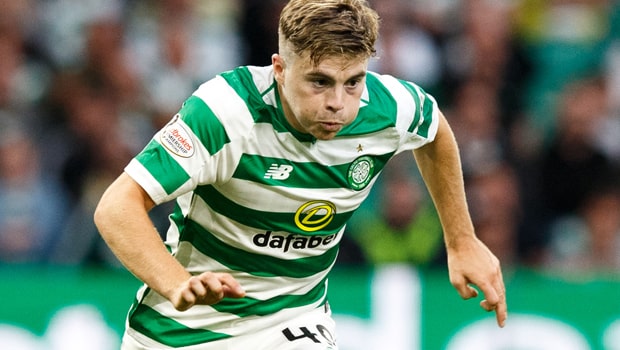 James Forrest felt there was a sense of shock after Celtic saw a half-time lead turn into a 3-1 Europa League loss against Salzburg in Austria.

Odsonne Edouard’s second-minute opener gave the Scottish champions a dream start, which they held until the interval.

Munas Dunbar levelled 10 minutes into the second half and Takumi Minamino pounced from close range six minutes letter to give Salzburg the lead.

Forrest was then sent off, having lost his balance and brought down flying full-back Andreas Ulmer in the box, allowing Dunbar to make it 3-1 from the penalty spot.

With Leipzig defeating Rosenborg in Norway, Celtic are now third in Group B after two games and Scotland winger Forrest suggests they were shocked to see the game go away from them so fast.

“There is a sense of shock and awe as I felt we were competitive and then its three quick goals and we’ve lost 3-1. I think that’s harsh,” Forrest told reporters.

“It’s a lesson for us against teams of Salzburg’s level. We know that they are a good side and they showed that by getting to the semi-final of the Europa League last season.”

Forrest knows that Celtic simply must start picking up some points on the road, or they will be out of Europe before Christmas.

“We are going to get difficult games at home as well but we need to start to nicking points away from home,” he added.

“Rosenborg away with be hard, as will the trip to Germany, but we know we can go there and be positive and get a result.”

Celtic are 7.50 to bounce back with a 3-0 win over St Johnstone at McDiarmid Park on Sunday.