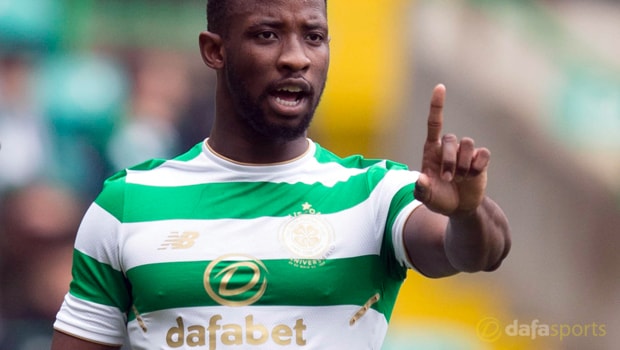 Brendan Rodgers has confirmed striker Moussa Dembele will be fit and available for selection when Celtic face Rangers at Ibrox on Saturday.

The French striker missed the opening month of the season but was back in last weekend’s 4-0 home win over Ross County, scoring Celtic’s second goal before being replaced after an hour.

Dembele was troubled by a hamstring problem late last season, enough to force him out of the Champions League qualifiers and Celtic’s opening league games this term.

The 21-year-old was not part of the travelling squad as Celtic eased into the Betfred Cup semi-finals with a 4-0 win over Dundee on Wednesday.

Rodgers has revealed that decision was made to ensure Dembele is as fit as possible for the first Old Firm clash of the new season against Pedro Caixinha’s side.

“Moussa will be back on Saturday,” said Rodgers “Sometimes when you have midweek games, you play and then recover and don’t do a lot of physical work in between.

“We had to make a decision – come out of working hard in training to play for an hour, or stay behind and get four good sessions? That’s what we did.

Moussa has had a good week and will be ready for Saturday.” Rodgers does have concerns over key defender Jozo Simunovic for the Ibrox tussle.

The Bosnia international missed the Dundee game with swelling on his knee and is racing against the clock to be ready.

Fellow central defender Dedryck Boyata did play against Dundee for an hour, his first action since the Scottish Cup final in May, and Rodgers says he’ll have no hesitation in fielding the Belgian against Rangers.

“I would have no doubts about putting Dedryck in. He’s been working hard – I could have maybe played him against Ross County but we felt this was probably the better game for him,” he added.

“He got a good hour in and it’s nice to see him back because he’s a big presence in the team and very dominant.”

Celtic are 1.75 to beat Rangers on Saturday, with Dembele 3.80 to net the opening goal of the game.