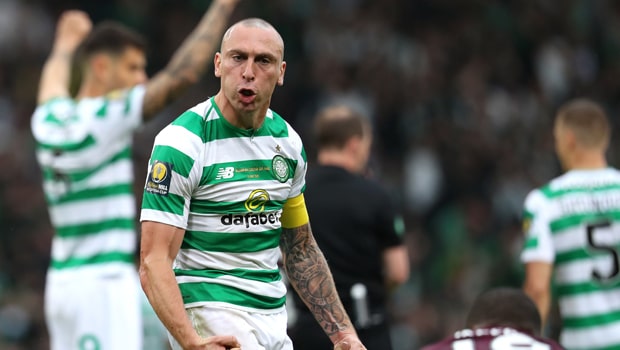 Celtic captain Scott Brown admits he does have plans to go into management when he hangs up his boots.

The 33-year-old recently led the Hoops to an unprecedented ‘treble Treble’ and has been the first man in line to lift 17 of the 19 trophies Celtic have won since he signed for the club back in 2007.

With his playing career nearing it’s end, Brown is looking to the next phase of his career and is currently doing his coaching badges with the Scottish Football Association.

He has been helping out with Celtic’s Under-20s side and is fully committed to pursuing a career in the dugout at some point in the future.

Back in January, former Parkhead supremo Brendan Rodgers suggested that Brown could even follow in the footsteps of Neil Lennon, who went from captain and later to a coaching role before taking over the first-team reins after the dismissal of Tony Mowbray in 2010. Speaking to Sky Sports, Brown said: “I’ve worked with some great managers over my career.

“I think for me now the best thing is to speak to them, learn from them as much as possible and take notes as well. “The Under-20s helped, but it was a great experience for me, as well as going in with Stevie (McManus) and Tommy (McIntyre) and understanding the game on their behalf as well.

“It’s been good, it’s been a learning experience and so has (doing my coaching badges).” Asked if he saw himself as a coach or manager down the line, Brown replied: “I think manager. I like that little bit of authority.

“I like to dictate what happens and I try to do that in a game. “I would like to hopefully one day have the opportunity to do that as a manager.”

Brown will remain an on-field leader for Lennon in 2019/20 when Celtic attempt to maintain their recent dominance of the Scottish game and they are priced at 1.33 to win the Premiership title for a record-equalling ninth successive year.