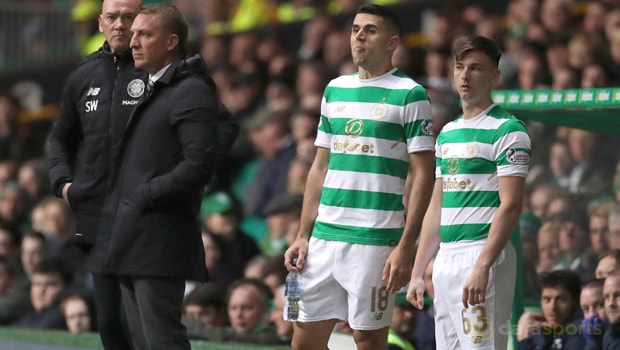 Celtic midfielder Tom Rogic insists Brendan Rodgers played a big role in convincing him to sign a new contract and feels the manager helps to get the best out of him.

The Australian, who joined the Bhoys from Central Coast Mariners in 2013, recently put pen to paper on a new five-year contract at Celtic Park.

Rogic has become an important figure for the Glasgow outfit over the years, having made 23 Premiership appearances in 2017-18, netting five times.

His performances have led to recognition on the international stage too and he will be heading to the World Cup this summer with the Socceroos.

Australia face a stern test to try and progress beyond the group after being drawn with France, Denmark and Peru in Russia.

The 25-year-old’s focus is firmly on the World Cup but he admits he has Rodgers to thank for his development over the last few years.

“I think working under him is very intense,” he said.

“He challenges you every day and certainly doesn’t allow for anyone to become complacent or rest on what they might have achieved in one moment.

“There’s always the desire to achieve more and become successful. He’s challenging me and I feel as though I play my best football under him, and hopefully I can continue my progress and development to become better.

“I am happy at the club, I am happy with where I am. The club made me a great offer and I think I played my best football there and I’m working under the best manager I’ve ever worked under.

“I feel as though it’s a great place to be to continue to become a better footballer. It’s a very simple decision and it happened quite quickly.”

Australia have failed to make it beyond the group stage on their last two appearances at a World Cup and they can be backed at 1.18 to crash out in the group this summer.