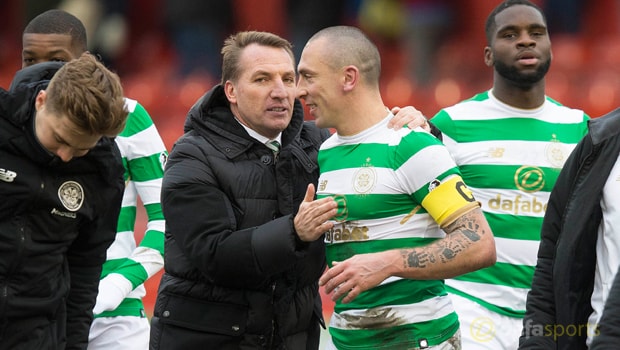 Celtic manager Brendan Rodgers believes his players will face a tough test when they travel to take on Rangers next weekend.

The Bhoys can edge closer to a seventh successive Premiership title if they take all three points away from their main rivals Rangers on Sunday.

Celtic currently sit top of the table with a six-point advantage over second-placed Rangers and they also have a game in hand with 10 matches still left to play.

Rangers, who are priced at 29.00 to win the Premiership, know they must find a way to beat Celtic inside 90 minutes for the first time since March 2012, when they ran out 3-2 winners in a dramatic clash at Ibrox, if they are to keep their slim title hopes alive.

Graeme Murty has helped to improve Rangers’ fortune since he replaced Pedro Caixinha at the helm on a permanent basis in late December and they head into Sunday’s clash off the back of five successive victories in all competitions.

Celtic’s recent form isn’t quite as strong and they have won just three of their last five engagements, having drawn with St Johnstone and lost to Zenit St Petersburg.

Rodgers believes the current Rangers squad is the strongest he has seen since taking charge of Celtic and expects them to provide a stern test.

“What they’ve been striving for in my time here is consistency and stability.

Graeme has done a very, very good job of that. It’s not easy, given the temporary charge he was in,” Rodgers said.

“There are still players who may be unsure what’s happening. But once he was given the reins, at least that allowed him to plan as best as he possibly could.

“They look, from what I see anyway, to have a better spirit.

“So, I think they’re in a better place than at any other time, since I’ve been up here.”