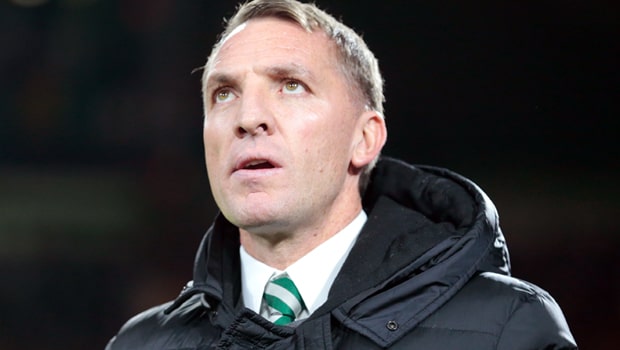 Celtic manager Brendan Rodgers says his only focus is the Scottish giants amid reports he is being lined up to become the next Leicester City manager.

Former Swansea City and Liverpool boss Rodgers took charge at Parkhead in 2016 and has enjoyed a hugely successful stint, having completed the ‘treble-double’ last season.

The Bhoys are on course to win all three domestic trophies again this term, which would complete a remarkable ‘treble-treble’, but there is a greater challenge this time around, with Steven Gerrard’s Rangers vying more seriously for honours.

A return to Premier League management has been mooted for the Northern Irishman since last summer and reports are now linking him with the Leicester City hot seat, currently occupied by Claude Puel.

Despite guiding the Foxes to eighth position so far this season, the French tactician is said to be a couple of bad results away from the sack and the 2015-16 English champions are considering the Celtic chief as a replacement.

However, Rodgers has clarified his stance on the matter and insists he is happy with his Celtic life right now. Speaking at Celtic’s Lennoxtown training complex, he said: “Someone mentioned it to me yesterday.

It is the time of the year where you get players and managers linked with clubs and whatnot. For me, my only concentration is here at Celtic.

“Leicester, as we have seen over the last few years, an incredible journey that they have been on as a club and obviously the unfortunate circumstances (owner Vichai Srivaddhanaprabha’s death in a helicopter crash) that they had earlier this season.

“It is a fantastic club but for me at this moment in time my concentration is purely on Celtic and looking forward to the second part of this season.”

Celtic are back in action on Saturday when they play host to Airdrieonians in the Scottish Cup and the Bhoys are 1.05 favourites to win. The draw is priced at 11.00 while the visitors are 29.00 to cause an upset.