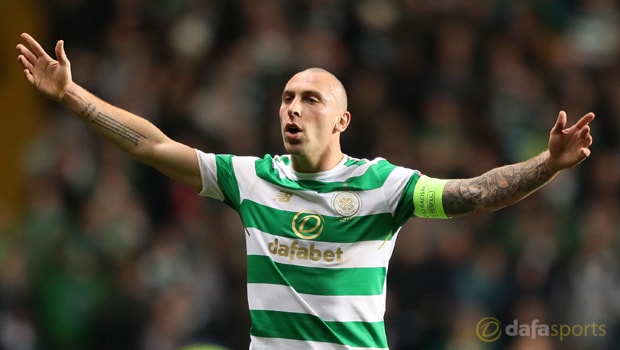 Celtic captain Scott Brown has targeted a win in Sunday’s Betfred Cup Final against Motherwell as the perfect antidote after the midweek mauling by Paris St-Germain in the Champions League.

The Hoops captain insists the 7-1 scoreline in Paris makes people too quick to judge, as he stated that Celtic are now within sight of achieving their goal of European football after Christmas.

First up however is Motherwell on Sunday, and the opportunity to snare the first domestic silverware of the season in Scotland.

“You have to try to take the positives out of every result but once you look at the scoreline nobody really cares about any of the positives,” said Brown.

“But it is about how you bounce back and we have a huge game on Sunday.

“We need to make sure we go full steam ahead and hopefully be lifting that cup at the end of it.”

Celtic have proved no match for the PSG and Bayern Munich in the Champions League but, crucially, they defeated Anderlecht 3-0 away from home back in September.

The Belgians have also failed to garner any points in four games against the group heavyweights, so Celtic head into their final Champions League game next month knowing only a draw at home is required to secure the parachute into the Europa League that comes with third spot.

That, admits Brown, was the inevitable target once the draw was done in August. “At the start you would have taken European football (after Christmas),” he said.

“Everyone knew it was going to be a hard one for us, but the 3-0 away to Anderlecht is great for us and puts us kind of where we wanted to be and now it is in our hands.”