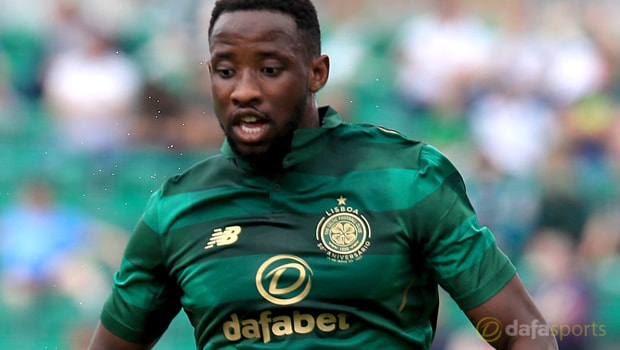 Celtic boss Brendan Rodgers says Moussa Dembele will not be leaving the Scottish champions this summer.

French outfit Marseille have been linked with the talented young forward and there were claims the two clubs had begun discussions over a potential transfer.

Rodgers says those reports are well wide of the mark and he has no concerns over Dembele’s immediate future at Parkhead.

“Moussa has been linked with 10 clubs,” he said. “There’s nothing in it from our perspective.

There’s no rush from Moussa. He loves being here. He knows he is in an incredible environment where he can learn and improve.”

Dembele has three years left on his current deal in Glasgow and Rodgers accepts that at some stage there is likely to be serious interest in the Frenchman and the player himself may wish to move on, but for now he has no fears over the attacker’s commitment to the club.

He added: “Part of the plan for Moussa coming in here was that, if he progressed how I thought he would progress and if he wanted to move at any time, it was going to be after the second year.

“The projection was that he could come here and improve, develop and win trophies and then look as a young player to go and show that he has the consistency to go again the next season.

“To be a successful player, you have to have the mentality to keep going year in, year out. He doesn’t change either way.

There can be lots of speculation. He gets on with his work. “There will be a natural solution.

There will be something at some point in his career here when there is an offer which is a sensible one for both parties.

“It’s certainly nowhere near that at this moment. He’s a player we want to keep and, if anything ever did come in, we would assess it.”

Celtic could be without Dembele, 21, for the first leg of their Champions League qualifier against Rosenborg at Celtic Park on Wednesday as he is rated as a doubt with a hamstring problem.

Fellow forward Leigh Griffiths is suspended, Erik Sviatchenko is a doubt with a knock and Dedryck Boyata misses out through injury.