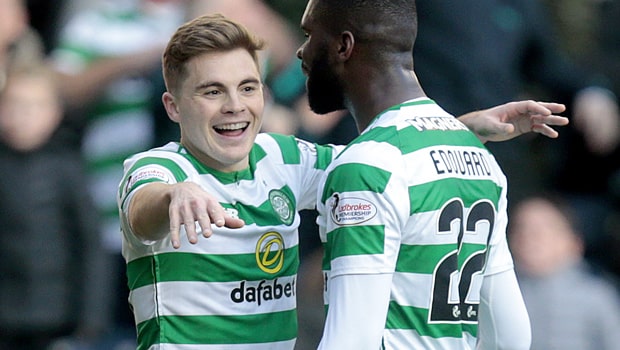 Celtic boss Brendan Rodgers hopes to have attacking duo Odsonne Edouard and James Forrest available in the near future.

The pair sustained injuries in the 2-0 victory at St Johnstone on Sunday and Rodgers was unable to call on the pair for Wednesday’s meeting with Hibernian.

Celtic, who are priced at 81.00 to win the Europa League, managed to manoeuvre the tricky clash without Edouard and Forrest in their ranks, claiming a 2-0 triumph, to maintain their lead at the top of the Premiership.

It’s now five wins on the bounce in league without conceding a single goal in the process but Rodgers accepts they need the duo back for some key fixtures.

The Bhoys return to action in the Europa League on Thursday with a home clash against Valencia before going on to face fourth-placed Kilmarnock on February 17.

Rodgers believes Edouard could be available for Sunday’s Scottish Cup tie with St Johnstone and hopes Forrest will also return to the fold in the next week.

“Odsonne Edouard will be okay by the weekend. I think he (Forrest) will definitely be ready for Valencia but we’ll assess it over the next few days,” Rodgers said.

Meanwhile, Rodgers admitted Emilio Izaguirre appears to have “got away with one” after being stretchered off in Wednesday’s win.

The defender was on the receiving end of a challenge from Darnell Johnson but Rodgers doesn’t expect him to be sidelined for a lengthy period.

He added: “It was a clumsy challenge on Izaguirre. The medical team tell me they think he’s got away with it, little bit sore but should be fine in a few days.”