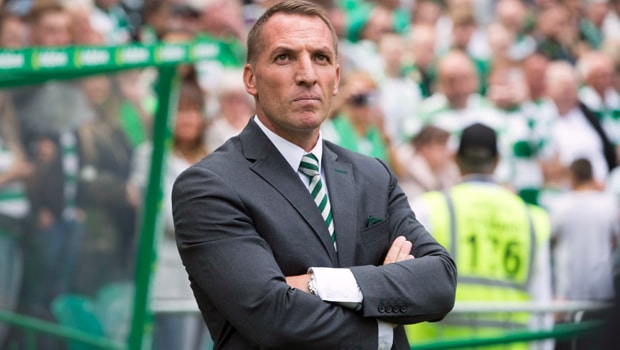 Celtic boss Brendan Rodgers has bemoaned his side’s defensive display as they were knocked out of the Champions League by AEK Athens on Tuesday.

The Bhoys went into the second-leg of their third qualifying round tie in Greece with the scores level at 1-1, but goals from Rodrigo Galo Brito and Marko Livaja quickly put AEK in the ascendancy.

Scott Sinclair did pull a goal back for Celtic with 12 minutes remaining and the Scottish champions came close to grabbing an equaliser that would have sent them through on the away goals rule.

However, it wasn’t to be for Rodgers’ side and they will now drop into the Europa League where they will take on either Spartaks Jurmala of Latvia or Lithuanian side Suduva in the play-off round.

Rodgers had to go into Tuesday’s match without two of his main centre backs, as Kristoffer Ajer was suspended while confusion remains over the fitness of Dedryck Boyata, who could well be seeking a move away from the club before the close of the transfer window.

Jack Hendry and Jozo Simunovic played at the heart of Celtic’s defence in Athens, but Rodgers was critical of the overall defensive performance of his team, not just in that match, but over the start of the season as a whole.

“We conceded a soft goal against Livingston and Alashkert and against Hearts we gave away a goal,” Rodgers said.

“We are not getting opened up and fantastic goals scored against us, it is concentration and basic defending.

“But we will go away and work with the players we have, try to improve and make them better.”

Celtic are next in action when they travel to Firhill to take on Partick Thistle in the Scottish League Cup on Saturday and they are priced at 1.91 to go on and win that tournament for the third successive season.