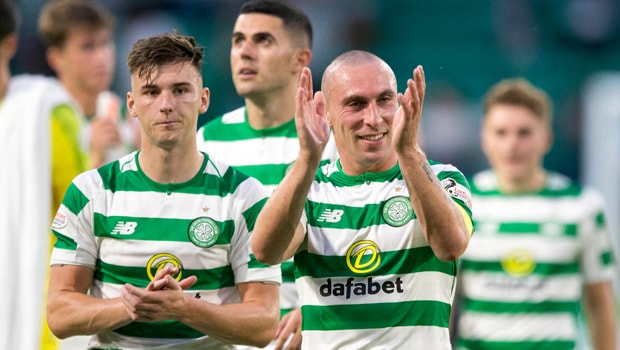 Captain Scott Brown has warned his Celtic team-mates they will have a target on their back in the upcoming season and it is up to them to ensure they continue to dominate Scottish football.

Celtic have been untouchable on the domestic stage over the past two seasons with the club completing the double-treble last season, in what was another record-breaking year for the Bhoys.

Brendan Rodgers’ men won a seventh straight Scottish Premiership title and the defending champions are firm 1.10 favourites to make it an eighth success on the bounce. Old Firm rivals Rangers, now managed by Steven Gerrard, are next in the betting at 9.00 as the ex-Liverpool skipper looks to get one over his former manager.

Celtic are aiming for an unprecedented treble-treble in the upcoming campaign and Brown, who has been at Parkhead since 2007, has urged his side to maintain their high standards.

“Everyone is going to be working to be that team to beat us and show they are better than us. It’s about how we react to the challenge,” he was quoted as saying by scotzine.com.

“We start fresh and have to go into it with the same levels, to be even better than we were last year. We believe we have come back in better condition and we are looking sharp already.

“We’ve already had some good results in pre-season and in the European qualifiers.

Our immediate aim is to make sure we get into the Champions League. We also want a good start in the Premiership and the Betfred Cup.”

Celtic start their title defence at home to Livingston on Saturday and the hosts are 1.13 favourites to begin with a win, a draw is priced at 8.50 whilst Livingston are massive 23.00 outsiders to cause a huge upset.