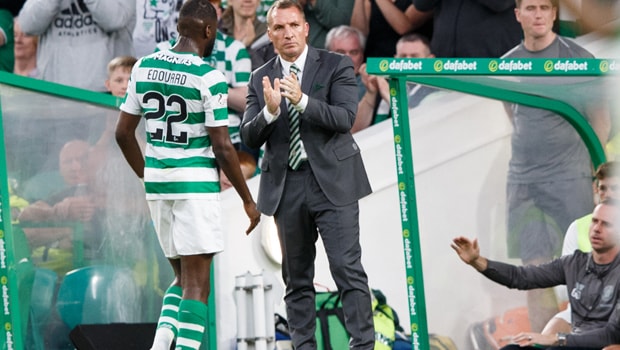 Brendan Rodgers is expecting to face some bids from English clubs for his Celtic stars as the transfer window south of the border closes earlier than Scotland.

The Hoops boss has already bolstered his squad with the signing of Frenchman Odsonne Edouard while goalkeeper Scott Bain has also been a permanent deal.

However, there is growing interest in several of his current first-teamers with top Premier League sides linked with a swoop for Kieran Tierney, while there has always been interest in Moussa Dembele.

Rodgers is keen to keep his key men at Parkhead as he looks to achieve an historic treble ‘Treble’ success domestically and also make progress in the Champions League.

But with the transfer window in England set to slam shut on August 9, Rodgers is anticipating some moves from the south for his top men.

“But you always have to be aware of it. “It will probably affect us in some capacity. “Until we actually experience it for the first time we won’t really know.

“It’ll just quicken up the selling or loaning of players because clubs only have until the first week in August now.”

He added: “The Premier League clubs will have to make earlier decisions on players. But I can see the concept and it is right.

“When your season starts it’s always difficult when you have guys in the changing room thinking about staying or going. “Especially when it gets into the last week, it becomes a little disruptive.”

Celtic are in action against Rosenborg on Wednesday when they host in their Champions League second round qualifier first leg.