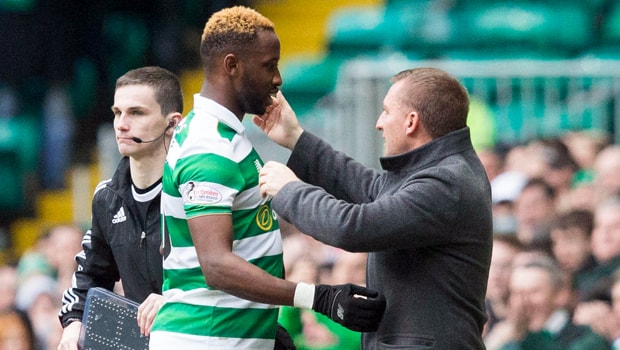 Celtic have rejected a “significant offer” for Moussa Dembele, according to Parkhead boss Brendan Rodgers.

Ligue 1 side Lyon have gone on record this week stating their desire to bring Dembele back to his native land.

Rodgers did not reveal the club involved, though it has been widely reported that the bid came from Lyon.

The Scottish transfer window will close on Friday night, and, while Dembele was not involved on Thursday evening as Celtic eased past Suduva to take their place in the Europa League group stages, Rodgers is keen to keep the striker in Glasgow.

The former Kilmarnock midfielder underwent a medical on Thursday and should be a Celtic player on Friday afternoon. DR Congo international Mulumbu, 31, was a free agent and the Hoops boss feels he is a decent addition.

“We were always on the lookout for a really aggressive number eight to play midfield,” Rodgers said.

“Youssouf was exceptional last year, he was very keen to come and play at a huge club and fits the profile and has the experience of being up here. All being well, it’ll be a really good move for us.”

Celtic are gearing up for Sunday’s first Old Firm Derby of the season at Parkhead, when Rodgers will come face to face with his former Liverpool captain, Steven Gerrard, now manager at Ibrox.