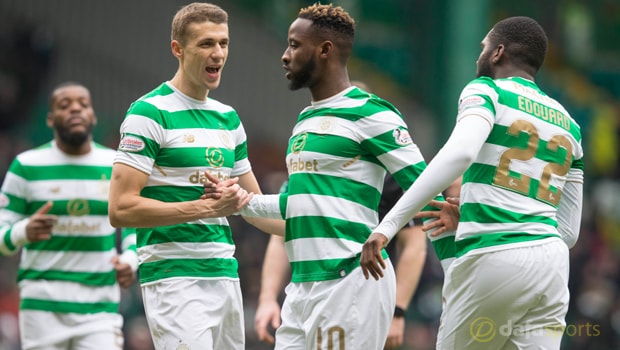 Celtic forward Moussa Dembele could be ready to “come alive” in the closing stages of the season, starting on Sunday against Rangers, says Hoops boss Brendan Rodgers.

The French ace enjoyed a prolific first term in Glasgow, scoring 32 goals as Celtic were unbeaten in winning a domestic treble. Problems with his hamstrings have restricted Dembele this season but, following some promising recent displays, he netted a brace in last weekend’s Scottish Cup success against Morton.

Rodgers admits it has been hard for Dembele at times, but he hopes he might now be over the worst.

“It’s never easy when you have those muscular injuries. And again it’s coming to terms with so many games,” he said.

“He started the first part of last season and it was very good. The second part was unfortunate, he was injured for a lot of that period. He started this season a little bit like that, but it could be the second part of the season he comes alive.”

The Parkhead boss suggests that Dembele is now in a place where he can sow the seeds of his hard work in getting back to full fitness.

“There is no doubt he has that hunger and energy back in his game,” added Rodgers.

“It’s very important for us. There are various reasons for that. He has worked very hard to get his fitness right and get his level of fitness and like you see now he looks much better.”

Dembele is 5.00 with Dafabet to score the opening goal against Rangers, while Celtic are 2.00 to win the game.

Rangers have been resurgent in recent weeks and could close to within three points of Celtic with victory on Sunday.

That may increase the pressure on his team, but Rodgers says it will get the best out of his leading forward. “I think he is a big-game player, Moussa,” said Rodgers.

“The players need to do it at Celtic in every game, but certainly in those big games he has always come up trumps and shown his qualities.”