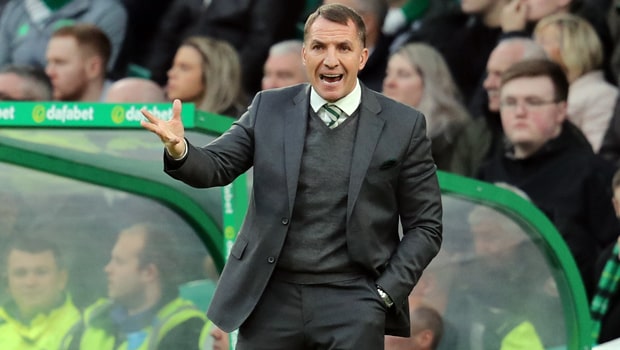 Brendan Rodgers has responded to speculation linking him with the vacant Leicester City job by stating he remains ‘fully concentrated’ on his work with Celtic.

The Foxes sacked manager Claude Puel on Sunday and Rodgers has been touted as a potential replacement.

Leicester are said to be weighing up the possibility of paying a £6million compensation package to Celtic for the services of the 46-year-old former Liverpool and Swansea coach.

Rodgers will have two years of his current Parkhead contract to run this summer, and Leicester may wait to make their move at season’s end.

Having steered Celtic to seven domestic trophies from seven available, Rodgers is on the brink of a treble-treble in Scotland and, he says, his focus is on the task at hand.

“My job is to concentrate on the football aspect, and that is with Celtic,” Rodgers said before watching his team dispatch Motherwell 4-1 on Sunday.

“I’ve been stood here for two and a half years and I’ve been asked similar questions, my message is always very, very clear, I’m very concentrated on the game.”

Celtic are eight points clear of rivals Rangers as they chase eight Scottish Premiership titles in a row.

Hoops supporters remain keen to have the Northern Irishman at the helm to lead their pursuit of the much-vaunted ‘ten-in-a-row’ and former Celtic goalkeeper Pat Bonner believes that is a key factor for lifelong Bhoys fan Rodgers.

Bonner feels Rodgers’ relationship with the Celtic board may be defining. “Any manager, Brendan Rodgers included, would be interested in that type of job.

It takes you back into the Premier League, it’s well paid and they have the capabilities of challenging for Europe,” he told BBC Sport. “Whether he would give up this job for it is the big question.

He’s well paid also, he’s in Europe also, he’s winning trophies, and he’s a God as far the fans are concerned. Ten in a row is sitting there for him.

“Everybody knows he needs to strengthen in the summer. He’s a great developer of young players but Celtic need more than that, and that takes money.”