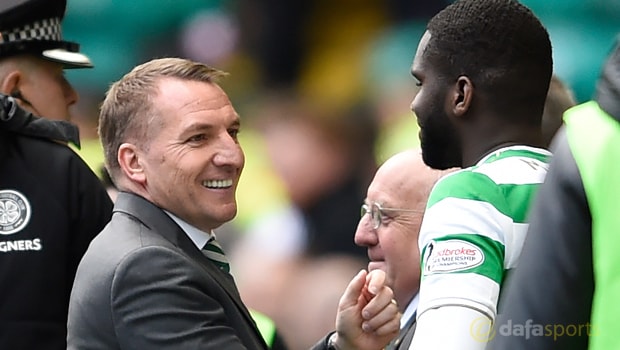 Celtic boss Brendan Rodgers doubts whether in-form forward Odsonne Edouard will be able to feature for the Hoops again before the end of the season.

The France youth international joined the Bhoys on loan from Paris Saint-Germain last summer and after biding his time for first-team opportunities, he has seized his chance over recent weeks, netting three goals in his last three appearances, including two in the 5-0 hammering of Rangers.

However, the 20-year-old suffered an apparent hamstring injury during Sunday’s 3-1 victory at Hearts and Rodgers has now revealed the youngster is a major doubt for next weekend’s Scottish Cup final against Motherwell and he could well have played his last game for the club.

“He’ll struggle for next weekend,” Rodgers told the Celtic website. “It’s been unfortunate really for him. He’s got better and better as the season has gone on but he’s probably going to struggle between now and the end of season.

“He’s adapted very well and you see his qualities. It’s a shame for him if he has to miss out as he’s been a very important member of our squad.”

Edouard’s fellow striker Leigh Griffiths missed the clash with Hearts through illness and he will also be unavailable for Wednesday’s Scottish Premiership clash with Kilmarnock at Parkhead, although he is not a doubt for the cup final.

“Leigh will be rejoining the training group tomorrow,” Rodgers added.

“He wasn’t well last week. He won’t be available for tomorrow but should be fine by the weekend.”

Despite their seeming lack of firepower, Celtic are priced at 1.22 to beat Kilmarnock on Wednesday, while the visitors are available at 11.00 and the draw is on offer at 6.00.