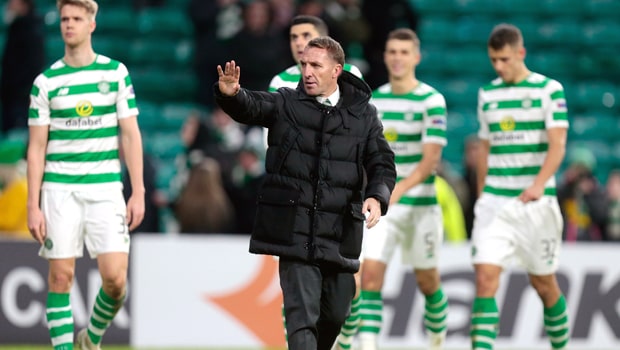 Brendan Rodgers has described Celtic’s progress through to the knockout stages of the Europa League as a “huge achievement”.

The Bhoys went into the final match of their group campaign against already-qualified Salzburg at Parkhead on Thursday knowing a point would be enough to see them through to the last 32.

However, second-half goals from Munas Dabbur and Fredrik Gulbrandsen put the visitors in control of the match and Celtic were unable to fully respond despite substitute Olivier Ntcham netting in stoppage time.

In the end that result proved irrelevant for Celtic as nearest rivals RB Leipzig could only draw with group whipping boys Rosenborg, which meant the Glasgow giants joined Salzburg in making it through to the next round.

Rodgers was delighted to see his side progress, labelling it a huge achievement considering the quality of the opposition within the group.

“First, a huge congratulations to my players,” Rodgers told reporters.

“This campaign was over six games, so to finish in a really tough group with nine points and qualify is a huge achievement.

“Of course in the game tonight, the best team won tonight, Salzburg were good, dynamic, sharp, with some really good players.

We didn’t play well, but we showed over the six games that we can play well and played well in enough of the game to get the points in a very tough group.

“You have two Champions League teams in Salzburg and Leipzig, the investment, everything that goes into their organisation which is based to succeed.

“So for us to come out on top against a high-ranking team from one of the top European leagues, Leipzig, is another big step in the progress of our players.”

Celtic, who could come up against the likes of Chelsea, Arsenal or Napoli in the knockout stages, are 51.00 to go all the way and win the Europa League this season.