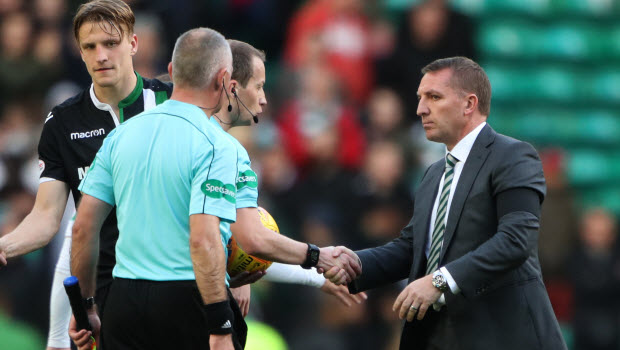 Brendan Rodgers declared himself pleased after a much-changed Celtic side squeezed past Dundee 1-0 at Parkhead.

The visit of Dundee marked the beginning on a hectic 17-day spell between now and month-end where the Hoops will play six times.

Rodgers therefore elected to shuffle his pack, with Cristian Gamboa and goalkeeper Dorus De Vries appearing for the first time this season in a team that also included Nir Bitton at centre-back and Kouassi Eboue in midfield.

With Bayern Munich in Germany in a few days’ time, Rodgers conceded that getting three points from the Dundee game was all that really mattered.

“There are a lot of games that require a lot of concentration and lots of changes for us [against Dundee,” said Rodgers. “I thought, bearing all of that in mind, to get the result, keep the clean sheet and get the three points was an absolutely brilliant result for us.

“It was about getting the result. It was never going to be as cohesive as usual with so many people missing and very little time to work.”

Bayern are next up on Wednesday in the Champions League before a League Cup semi-final against Hibs next weekend. Celtic then face a top of the table tussle with Aberdeen at Pittodrie and a league game with Kilmarnock before welcoming the Bundesliga champions to Glasgow, all by October 31.

Rodgers said he told his team before the Dundee game that their resolve is about to be severely tested. “What we have is incredible mentality.

I said to the players before the game that we’re going into a run of fixtures now and champions do that little bit extra.” Celtic are 23.00 to win in Munich, with Bayern 1.08 and the draw 9.50 for the Allianz Arena clash.