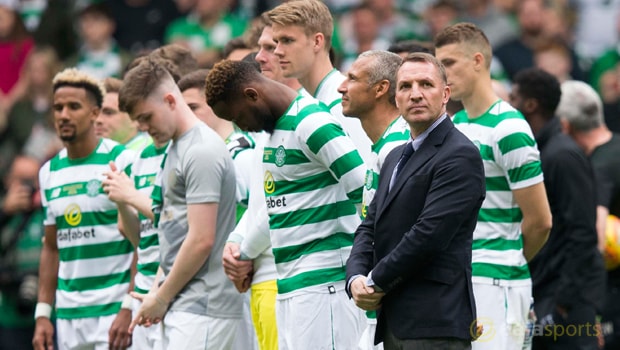 The Hoops added the Scottish Cup to their collection for the second successive season thanks to a 2-0 win over Motherwell at Hampden Park.

Play-maker Callum McGregor opened the scoring in the 11th minute, before fellow midfielder Olivier Ntcham doubled the lead thanks to a 25-yard piledriver.

Motherwell were unable to break Celtic down and find a way back into the game and they lost a second successive cup final to Rodgers’ men.

Saturday’s victory means Rodgers has now won eight matches at the national stadium since 2016, although the former Liverpool coach is adamant his troops will get even better.

He told Sky Sports: “They can improve in terms of performance level, league and points.

“I need to push them even harder next year and that’s going to be important. However, the club can enjoy this year. It’s a monumental achievement, it’s a historical day and one that will be with everyone forever.

“We’ll come back in a few weeks’ time and go again. “I’m immensely proud. I thought the players were fantastic today and I’m just so happy for the players, the supporters and the staff.

“They put so much in. it’s been a really tough, competitive season for us this season, but to come out of it again with three trophies, it fills you with pride.”