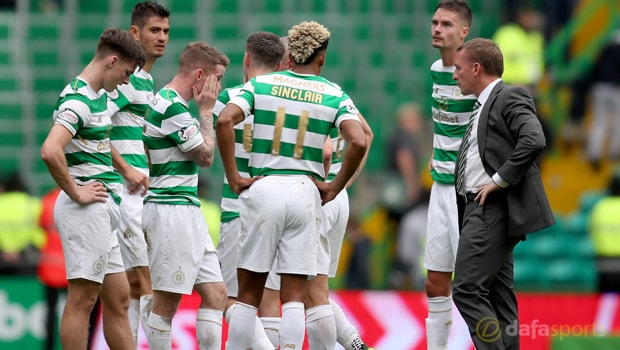 Brendan Rodgers has backed his Celtic side to continue improving following Wednesday’s brilliant 3-0 win at Anderlecht.

Having lost their opening Champions League fixture 5-0 at home to Paris Saint-Germain, and with Bayern Munich also in Group B, the trip to Brussels was seen as key to the Bhoys’ hopes of continuing in Europe beyond Christmas.

Despite failing to find their rhythm for large chunks of the game, Rodgers’ men took their chances, as goals from Leigh Griffiths, Patrick Roberts and Scott Sinclair saw them to a famous triumph.

The win at the Constant Vanden Stock Stadium was Celtic’s first away victory in the Champions League since winning 3-2 at Spartak Moscow in 2012 and the boss was understandably delighted with the performance.

Rodgers believes the result can prove a stepping stone for both his side and Scottish football in general and is confident there is still plenty of improvement to come from the Bhoys.

“It was an outstanding performance and result. It was a real pressure game for us,” Rodgers said.

“For a Scottish team to come away, win 3-0 and keep a clean sheet at this level is obviously a big achievement.

We will reflect on the game, but I believe we can be better than we were on this occasion.”

He added: “Progress is what you are looking for as a coach. For our guys to show that kind of improvement is great credit to them.

They will gain belief and confidence, but they also know they have to continually improve.”

Saturday sees Celtic return to domestic action when they take on Hibernian in a game they are 1.25 to win, with the draw 6.00 and former boss Neil Lennon’s men 9.50.