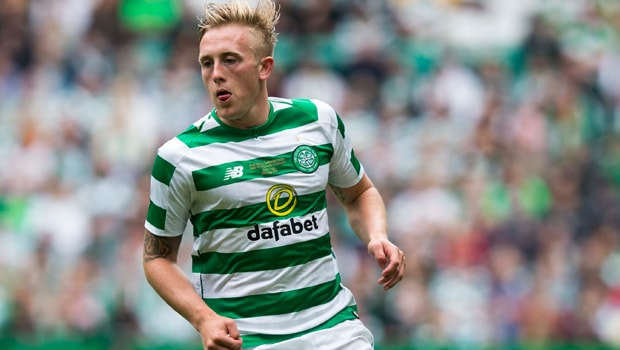 Celtic youngster Calvin Miller has put pen to paper on a new contract that will see him remain with the Glasgow giants until the summer of 2020.

The 20-year-old is a graduate of Celtic’s academy, although he only featured four times in Brendan Rodgers’ first team last season, with the most recent of those appearances coming against Kilmarnock in May.

The Scotland youth international is highly regarded at Parkhead, however, and has now been rewarded with a contract extension.

Miller is now expected to leave Celtic on a temporary basis to secure regular first-team football elsewhere and admits he is delighted to have sorted out his long-term future before heading out on loan.

“Now I just want to go out and play regular first-team football to hopefully get more game-time and show the manager I’m ready for next year.

“The manager is obviously confident in me. He sees me long-term at the club and wants me to develop and that’s why he wants me to go out on loan.”

There has been no confirmation as to which club Miller will be joining on loan, but the full-back believes he is ready for first-team action after training regularly with the rest of the Celtic squad.

He added: “I’m training every day with the best players in Scotland.

I’m learning every day playing against the best wingers and the most important thing for me is to keep working hard, express myself and be confident.”

It is unclear whether Miller will have secured his loan move away from Celtic before the first leg of their Europa League qualifying clash with Suduva on Thursday.

The Bhoys are priced at 1.40 to claim a first-leg advantage in Lithuania, while Suduva are available at 7.50 and the draw is on offer at 4.20.