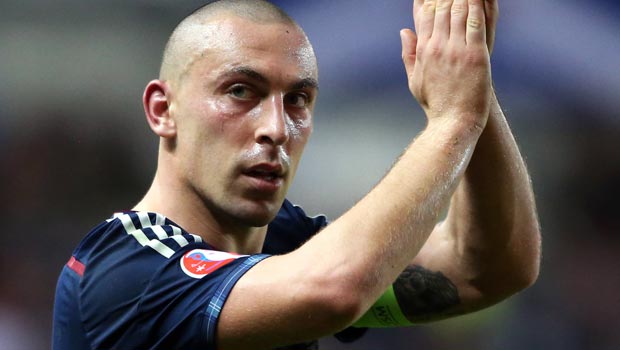 Scott Brown claims the belief is now back among the Scotland ranks after getting their first victory of the Euro 2016 qualifying campaign.

After losing the opening game in Group D to Germany, Gordon Strachan’s men got the first points on the board with a win over Georgia at Ibrox.

It was a deserved victory for Scotland as they dominated a game in which Georgia sat deep and defended for large periods. The hosts saw most of the possession and could have had more goals had it not been for a number of top saves from Georgia stopper Giorgi Loria.

Scotland got what turned out to be the winning goal just before the half-hour mark when a strike from Shaun Maloney was saved and then deflected in off Akaki Khubutia for an own goal.

It was a good performance from a Scotland side that are enjoying something of a resurgence under Strachan. Brown claims the Scots are currently going through a solid period as they now sit third in Group D, behind Poland and the Republic of Ireland but ahead of Germany.

The Scotland skipper told Sky Sports: “We’re getting the belief back.

We’re looking strong and we got the three points, which is the main thing.

“We have got to take every positive we can from it. We created chances and could have been three up at half-time. We defended really well and were solid all the way through. They didn’t even have a shot on target, so it tells you how well we defended.”

Next up for Scotland is a trip to face Poland in Warsaw on Tuesday and they will be in for a much tougher encounter against a strong Polish side, who caused a shock on Saturday when they defeated world champions Germany 2-0.