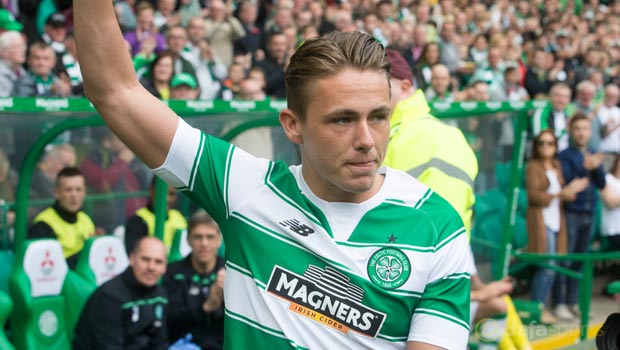 Scott Allan is relishing the prospect of European football with Celtic after securing a move from Championship side Hibs.

Allan is a boyhood fan of Celtic’s fierce rivals Rangers, who saw three bids knocked back by the Easter Road outfit as Hibs didn’t want to sell their star man to a direct title rival.

The Hoops managed to convince the Edinburgh side to sell the midfield playmaker with a £275,000 bid plus Liam Henderson on a season-long loan deal.

Allan has now moved to play down his bond with Rangers and insists his decision to join Celtic was based solely on football reasons.

When asked if his bond with Rangers was exaggerated, Allan told the Daily Record: “Yeah, I would say so. My job is as a football player.

For me to come to Celtic, moving up a division with European football, it’s an easy decision to make and that’s why I made it.

“For me, it’s just about working hard, trying to force my way into the team and taking it from there.

“It’s 2015, you know what I mean? Things have moved on, Celtic have had great players in the past who have done it.

“I will get a lot of stick off some people but it’s about playing football, developing and this is the right place for me.”

Celtic host Swedish champions Malmo in the first leg of their Champions League qualifying play-off on Wednesday and they can be backed at 1.62 to secure a win, with Malmo at 6.00 while a draw is available at 4.00.