Scotland captain Andy Robertson and Kieran Tierney all at sea 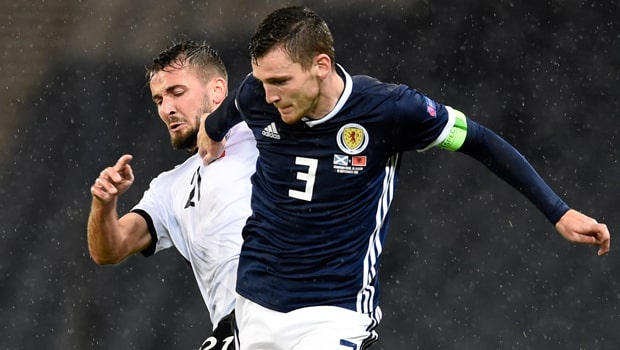 After a dreadful 2-1 Nations League defeat to Israel, Scotland captain Andy Robertson admits both he and Celtic’s Kieran Tierney are playing out of position for the national side.

Alex McLeish has employed a 3-5-2 formation in the last two outings but it all unravelled in Haifa against a side with just two home wins in four years.

Robertson again began wide left while Tierney operated as one of the three central defenders, and the Liverpool man confessed that it is alien to both him and the Bhoys ace.

“Both of us are out of position,” he told BBC Scotland.

“So it’s two positions we need to try and learn. We’ve played there before but we need to learn it in this system. Unfortunately, that will take time. “Both of us want to play left-back and there isn’t that slot just now.”

The result leaves League C Group 1 all tied up, with the Scots, Israel and Albania all on three points after two matches and they will conclude proceedings in the group away to Albania on November 17 and at home to Israel three days later.

Before then, McLeish welcomes Portugal to Hampden Park for a friendly on Sunday, with Scotland on offer at 4.00 and Fernando Santos’ men priced at 1.91.

It remains to be seen if Robertson and Tierney are used in the same way but the boss knows that he and his charges will receive the inevitable backlash after Thursday’s debacle.

“It’s doom and gloom, we lost, we know the consequence of losing, you have to suffer a wee bit for it,” he said.

“We’re obviously going to get a bit of stick about this and it’s up to us to bounce back. That’s what normally I would expect from Scottish people.”