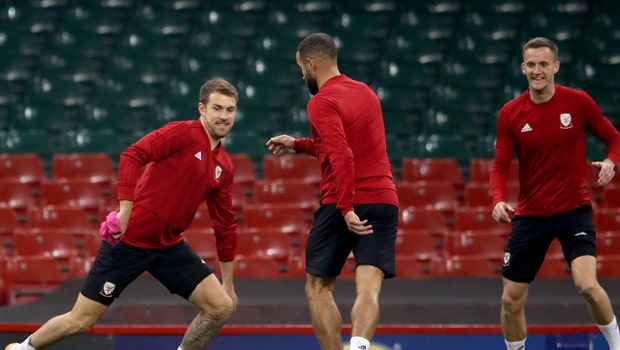 Midfielder Ramsey has spent the last decade at the Emirates Stadium and has amassed nearly 350 appearances in all competitions.

But his long-term future remains up in the air as he is out of contract at the end of the season and Arsenal have reportedly decided not to offer him a new deal.

The 27-year-old is unlikely to be short of suitors if he does leave the Gunners, with Liverpool and Manchester United both credited with an interest, as are Serie A giants Juventus, AC Milan and Inter.

Ramsey is currently away on international duty with Wales who are due to take on Spain in a friendly at the Principality Stadium on Thursday before they travel to Dublin to face the Republic of Ireland in the UEFA Nations League five days later.

Dragons boss Giggs is keen to stay out of talk regarding Ramsey’s club future but insists it will not distract the former Cardiff youngster from his duties with the national team.

“I don’t want to get involved. No, it hasn’t been,” Giggs told reporters when asked if Ramsey’s contract situation had been a distraction.

“It wasn’t in the last campaign and it hasn’t been in this campaign. Aaron enjoys meeting up [with the Wales squad] and as for contract talks, I don’t really want to get involved in that.”

Ramsey is expected to be a central figure against Spain as Wales captain Gareth Bale will miss the match due to muscle fatigue.

Wales are priced at 9.00 to secure a victory against the 2010 world champions, who are available at 1.33 to make it three wins from three under new boss Luis Enrique, while the draw is on offer at 4.75.