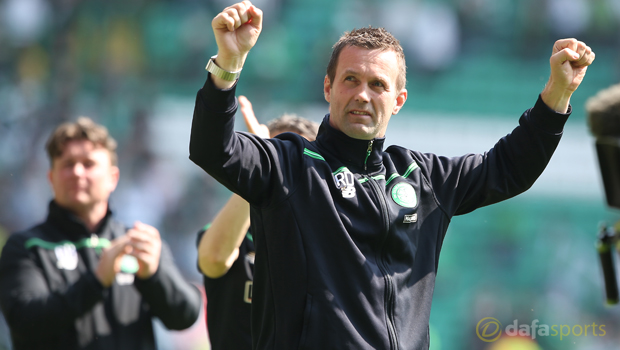 Ronny Deila insists he has left Celtic in a decent position to move forward after he leaves the club this summer.

Celtic required just one point from their final three games to see of the challenge of Derek McInnes’ Dons and they got the job done in Glasgow, albeit only after a second half rally from the visitors.

A brace from Patrick Roberts and Mikael Lustig’s goal shortly after half time had Celtic in complete control but Niall McGinn pulled one back and the Hoops were nervy once Andrew Considine had trimmed the margin to just one goal.

The laboured second-half performance from the champions was arguably synonymous with the problems Deila has encountered during his time in Scotland as his side struggled to piece together a complete performance.

The Norwegian is stepping down at the end of the season and he said it was a relief to have secured the title, the number one target for Celtic domestically.

“It’s a great day, the most important thing is to be champions of Scotland.

That’s the fifth in a row and hopefully this club is going to get many more in the future,” Deila told Sky Sports.

“Celtic is an unbelievably big club, a lot of money and things like that but at the same time you have do it.

You can see down in England, it’s not just a case of going out and doing it.”

Deila says some of Celtic’s younger generation have really developed under his watch, but he has told them they need to keep their nerve in key moments when things are not necessarily going to plan.

“I can say there’s a lot of young talent here, there is a bright future for a lot of the boys,” he added.

“They’ve been given a lot of experience in my two years here. You can see that they need to be mentally tougher, stronger.

“When things are going a little bit against you, they sometimes go into their shells.

That is not positive, we need to get out of that and get the best qualities like we did in the first half [against Aberdeen].”