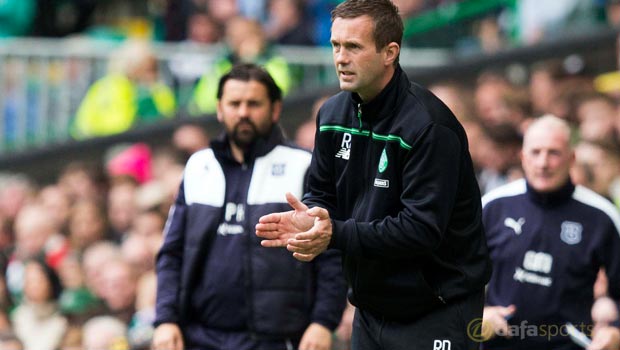 Celtic manager Ronny Deila has praised the spirit on show within his squad following Sunday’s 6-0 demolition of Dundee on home soil.

Deila’s side sit second in the Scottish Premiership after eight games, having dropped points in a draw away at Kilmarnock before losing at Aberdeen.

The Dons are currently leading the way in the Scottish top-flight, but an emphatic win over a dismal Dundee side sent out a clear message about how Celtic, who are priced at 1.13 to win the league outright, are steadily improving this term.

Emilio Izaguirre bagged a brace, while Tom Rogic, Leigh Griffiths, Scott Brown and Nadir Ciftci all chipped in with a goal apiece at Celtic Park.

It was undoubtedly the best performance of the campaign so far from the Bhoys and much needed as bounced back from two games without victory.

Deila admitted he was delighted with the way his side handled the fixture, and believes it is the first time he has seen a complete performance from the first minute to the last all season.

The 40-year-old Norwegian believes the bar has now been raised by his side and expects the squad to reach those levels consistently as they aim to climb to the top.

Deila said: “The team spirit was the thing that pleased me most about Sunday’s win. It is so important that we work very hard for each other, and I mean all 11 players on the pitch at the same time.

“Everyone did their job, the match-plan was executed and we want to do that for 90 minutes. This is what we did at the weekend.

Celtic can be backed at 1.29 to continue their winning form when they host Hearts, who are priced at 9.00 to claim victory when the sides meet on Saturday, while the draw is available at 5.50.