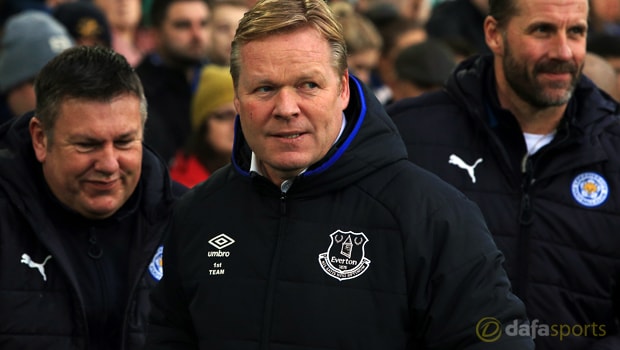 After a 2016 which saw them endure a number of highs and lows, the Toffees looked to have turned a corner after recording a run of two wins and a draw from their previous three games, including a 2-0 win over the Foxes on Boxing Day.

However, despite taking the lead after 63 minutes through Romelu Lukaku, they were brought back down to earth with a bang as a brace from Ahmed Musa saw Claudio Ranieri’s men book their place in the fourth round.

Koeman’s players capitulated after going ahead, with their fragile defence noticeably dropping deeper and deeper which only served to both encourage their visitors and enrage the Goodison Park crowd.

The Dutchman was less than impressed after the game, slamming his side’s performance and insisting they only had themselves to blame.

With them currently sitting seventh in the Premier League table, a full nine points behind Manchester United in sixth, their elimination from the FA Cup closed the door on what looked their most likely path to European football.

Koeman has now demanded an improvement and has reassured fans that he will do everything he can to drag his side out of their current mire.

“It’s not bad luck; we did it ourselves. It’s unbelievable how we dropped back,” said the Dutchman.

“Everyone is disappointed, but I know what we need to change. It’s my job to get results to match the expectations of this club.”

Next up for the Toffees is the visit of Manchester City on Sunday, a game they are 4.20 to win, with the draw 3.60 and Pep Guardiola’s men priced at 1.85 to claim all three points.