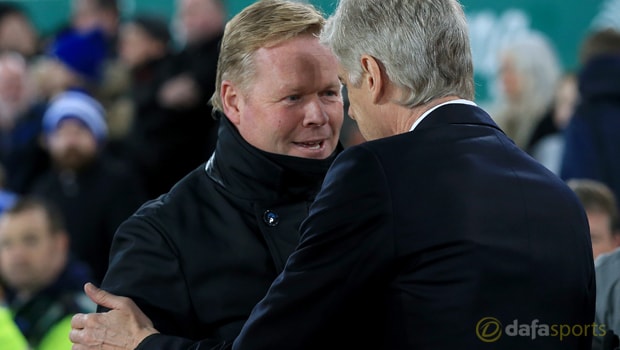 Everton manager Ronald Koeman was quick to praise his team’s commitment and desire after they came back from behind to beat Arsenal on Tuesday night.

The Toffees fell behind in the first half when Arsenal star Alexis Sanchez saw his free-kick pick up two deflections before flying into the back of the net.

After a slow start, Koeman’s men eventually kicked into gear and right-back Seamus Coleman grabbed an equaliser just before half-time with a header.

Everton maintained their relentless pace in the second 45 minutes and eventually got their reward when centre-back Ashley Williams headed home with four minutes to go.

Everton were forced to clear the ball off the line in the dying seconds but they held on and Koeman admits they must build on the performance.

He told reporters: “The key was how we played after 20 minutes. I think that was the team we like to see, what the fans like: face-to-face, aggression, pressing and playing football and going for it.

“We came back with great character. If you show that aggression and commitment it is difficult to beat Everton at Goodison Park.

“I hope the players will learn how we started and what we did after 20 minutes. That is what we need to show.

It is always possible to lose games against teams like Arsenal but not in the way we started. “I hope we realise how strong we can be if we play like this.”

Koeman’s side will need to be at their best in their next home game, with local rivals Liverpool next up on Monday night.