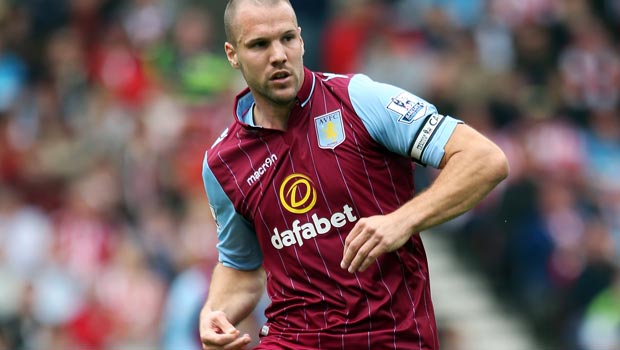 The agent of Aston Villa’s Dutch central defender Ron Vlaar believes that the time is right for his client to make a “big move” to take his career to a new level.

The 29-year-old continues to be linked with the likes of Manchester United and Arsenal following some impressive displays for the Netherlands at the World Cup finals in Brazil in the summer.

And with Villa having tumbled down the Premier League table in recent weeks and seemingly heading for another fight to stave off the threat of relegation, agent Arnold Osterveer thinks that the time is right to consider moving on.

He told Voetbal International: “It is obvious that for Ron, now is the moment to make a nice big move in his career.

“Ron is very ambitious. The situation is ideal for Ron right now.

“You can imagine that we are not in a hurry and I don’t want to react to the rumour that he will to either Arsenal or Manchester United, but Ron is very ambitious.”

Villa actually started the new season in positive fashion with three wins and a draw in their opening four Premier League games.

However, they have since picked up just one point from seven games, ending a run of six consecutive losses with an unconvincing 0-0 draw with West Ham last weekend.

Following the international break they are back in action on Monday November 24, when they play host to in-form Southampton, who are currently second in the table, having conceded just five goals in 11 games.

Villa can be backed at 4.05 to defeat the Saints, while Southampton are 2.20 to keep a clean sheet.