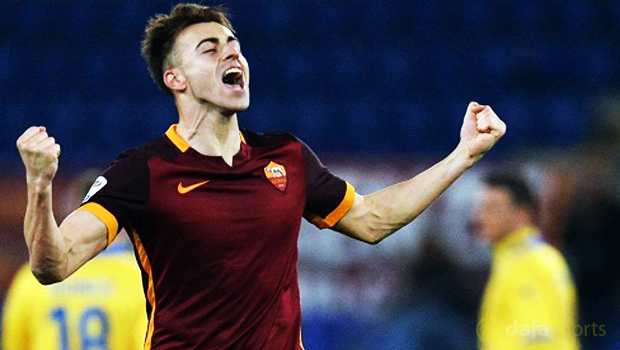 Roma forward Stephan El Shaarawy is hoping that he can kick-start his career after joining on loan as he looks to secure a place for Italy at Euro 2016.

El Shaarawy has endured a tough couple of years after making his name with AC Milan as a youngster.

The 23-year-old’s inconsistency has led to a number of loan spells away from the San Siro and a lack of recognition at international level.

Big-spending Ligue 1 side Monaco handed the forward a chance to revive his career in the first half of this campaign but he failed to hit the back of the net in 15 outings.

However, the Italy international has been handed another chance to get back on track when Roma handed him the chance to join on loan in January.

The Olympic Stadium outfit also have the option of signing El Shaarawy on a permanent deal for 13million euros at the end of the season.

El Shaarawy already has four goals in five outings for Roma and looks a much-improved player back in his homeland, having netted twice in Saturday’s 3-1 win over Empoli.

Roma boss Luciano Spalletti opted to start the forward ahead of Edin Dzeko and he responded well, while admitting he sees this loan spell as a chance to make a late push for a spot at Euro 2016 with Italy, who are priced at 19.00 to win the tournament outright.

El Shaarawy said: “I am very happy with my first brace in a Roma jersey, but also with the performance of the team

“We prepared well for this match and if we continue to take what we do during the week on to the field, we will keep doing well.

“After six months at Monaco I came here with the desire to show everyone what I could do. Before making the decision I was shown a lot of faith by the Coach and the director of sport Walter Sabatini.

“I knew that I couldn’t make a mistake this time. I started well, have to continue like this and find consistency in my performances and goals.

“I came here to give my all, give my career a turning point and target a place at Euro 2016.”