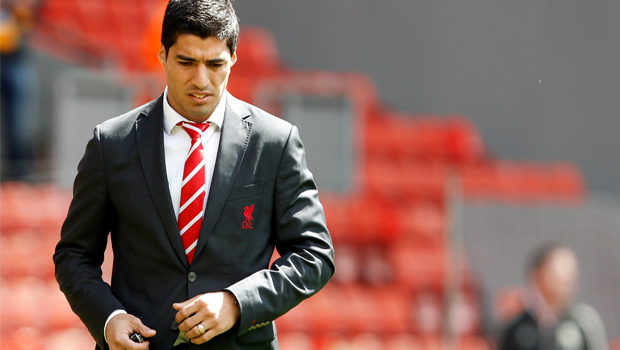 Suarez made it clear earlier this summer that he wanted to leave Liverpool and join a club in the Champions League. That prompted a couple of bids from Arsenal that have been turned down, with the Reds insisting they would only consider a deal if someone offered in excess of £50million.

Rodgers says Suarez, who misses the first six games of the new season anyway as he sees out the rest of his 10-game ban for biting Branislav Ivanovic at the end of last term, is happy at the club despite all the uncertainty.

“It’s a story that can keep running but for me there is no new news,” Rodgers told the Liverpool Echo. “Luis is happy. He totally understands the club’s point of view.

“He’s in a difficult position in terms of not being able to play because of his suspension – he will sit out the first six games and he will miss playing football. But he’s working hard and remains part of the group. He hasn’t been moping about.”

Rodgers insists the Suarez saga has not affected the good spirit in the squad over the summer as his side have impressed in their pre-season games so far, winning all four without conceding a goal.

“It could have unsettled them but it hasn’t,” Rodgers added. “It’s two fold really. Firstly, it says a lot about their professionalism. The environment that we’re creating is that the star will always be the team.

“We want to have top players here. But if for whatever reason we don’t, we will always know we can rely on the team and each other.”

Liverpool’s build-up to the new campaign continues with Steven Gerrard’s testimonial against Olympiacos on Saturday at Anfield.