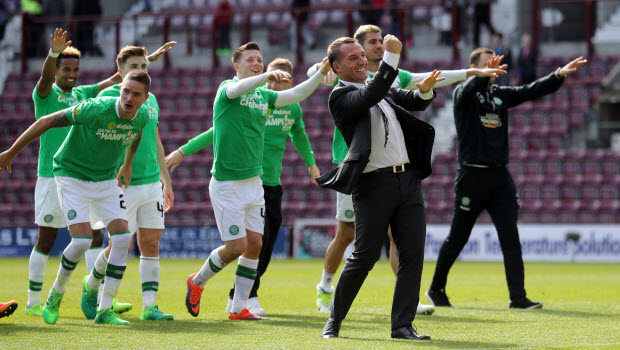 Brendan Rodgers believes his Celtic side have made significant strides from where they were 12 months ago.

The Bhoys booked their place in the Third Qualifying Round of the Champions League on Wednesday with a 4-0 win over Linfield, taking the aggregate score to 6-0 overall.

Next up is Norwegian side Rosenborg, with the first match taking place in Glasgow on Wednesday before the return leg the following Tuesday in Trondheim.

Last season was an historic campaign for Celtic, as not only did they win the domestic treble in Rodgers’ first season, they did so by remaining unbeaten.

Some encouraging Champions League performances only helped add to the feel-good factor at Parkhead and much the same is expected this time around.

Celtic begin their Scottish Premiership campaign at home to Hearts on August 5, a game they are 1.25 to win, with the draw 5.50 and the Jambos 11.00.

Rodgers admits he was pleased with what he saw against Linfield and is confident his side are heading into the new season stronger than 12 months ago.

“Some of our football at this stage of the season was very good,” he said. “The fitness of the players will have gained another extra notch forward.

“Our only real disappointment was we didn’t score more in the first half. We were a bit wasteful but that happens at this stage of the season. Our intensity wore them down in the end so I’m very pleased.

“Tactically we’re very good, physically we’re still building up. But the team and the whole shape, how they’re working, playing and running, we are 100 per cent in a different place to this time last season.”