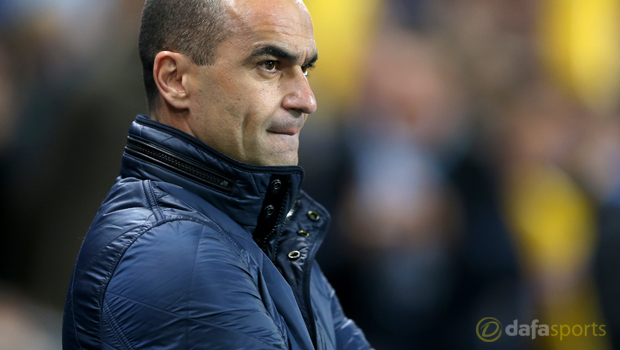 Roberto Martinez has urged his Everton players to use their “heartbreaking” Capital One Cup semi-final defeat against Manchester City as “an inspiration to do something special”.

The Toffees chief watched as his side built on their 2-1 first leg lead when Ross Barkley fired them in front after 18 minutes at the Etihad Stadium on Wednesday evening.

Fernandinho levelled before City went in front in controversial circumstances on 70 minutes when Raheem Sterling took the ball out of play down the left before pulling it back into the path of Kevin De Bruyne to score.

That levelled the tie on aggregate at 3-3 and Sergio Aguero’s header six minutes later sealed City their second League Cup final in three seasons and they now face Liverpool at Wembley on February 28.

Martinez was left frustrated and disappointed at the way his side went out of the competition, but he hopes his players can use it as a positive.

“It was a good game of football, we scored the first goal, got in a great position. It was a big call for their second goal, heartbreaking, when you watch the replay it is incredible you don’t get the decision right,” Martinez told Sky Sports.

“It is impossible how you describe when you saw a decision once more, so clear and so big, it is heartbreaking, I don’t think anyone in the stadium would disagree that goal is the major, major change in the tie.”

He added: “We should take this as an inspiration to do something special because that call cost us. We played with an incredible swagger and character.”

Everton are 13.00 to win this season’s FA Cup as they prepare to face League Two side Carlisle United at Brunton Park on Sunday.