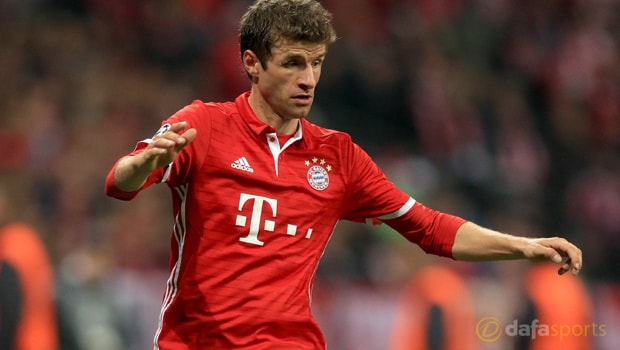 Robert Lewandowski believes Bayern Munich boss Carlo Ancelotti should play Thomas Muller centrally if he wants to bring the best out of him.

The 27-year-old has struggled for form over the last year or so and has only netted once in 13 Bundesliga outings since Ancelotti arrived at the Allianz Arena in the summer.

His performances recently led former Bayern and Germany captain Lothar Matthaus to question where he fits into the team, with the 55-year-old suggesting he could struggle for regular football during the second half of the season.

Ancelotti was quick to counter Matthaus’ claims by insisting Muller will get plenty of minutes, as Bayern look to claim a fifth straight title, having headed into the winter break with a three-point advantage over RB Leipzig.

The German international’s versatility has seen him feature in a number of positions during his career but it is in the number 10 role where he appears most comfortable.

Lewandowski has again been the Bavarians’ most potent attacking threat this season, netting 21 goals in all competitions during the opening half of the campaign.

The 28-year-old believes his out-of-sorts team-mate still has a huge role to play for Bayern and knows which position he would prefer to see the World Cup winner feature in.

“It is better for Thomas is he plays right behind me in the middle of the pitch,” he was quoted as saying by TZ.

“He has more room to find space in the middle. “If I move to the left, Thomas immediately moves to the right.”

Bayern resume their Bundesliga campaign on January 20 away at Freiburg, a game they are strong 1.22 favourites to win, with the draw at 5.50 and their opponents the 12.00 underdogs.