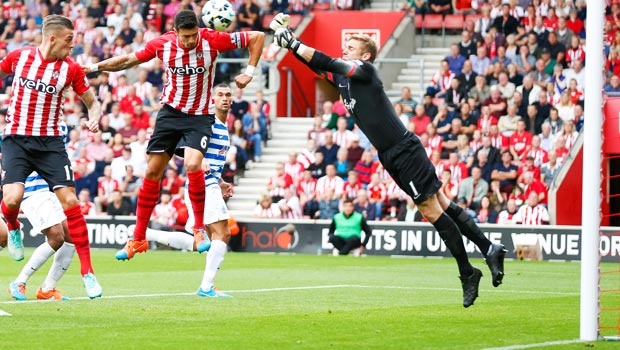 Queens Park Rangers goalkeeper Robert Green believes his side have improved in recent weeks despite the R’s tasting defeat again on Saturday.

Harry Redknapp’s side were beaten 2-1 by Southampton at St Mary’s with Ryan Bertrand opening the scoring. Charlie Austin scored a sublime equaliser but his goal was matched by Graziano Pelle who scored with an overhead kick to ensure Ronald Koeman’s men picked up all three points.

The London outfit are still in the bottom three and they have a number of injury worries with Sandro, Joey Barton and Jordan Mutch all out at present.

Despite their form and recent defeat, Green believes the R’s are getting better all the time.

He said: “I think we’ve improved massively from two weeks ago when we played Manchester United.

“There’s obviously still work to be done but over the course of the season, you look at games that we’ve played in home and away and we’ve won one by the odd goal, lost a couple by the odd goal and drawn one so that’s how tight the Premier league is.

“At the end of the day you want to come out on top by the odd goal more often than not and we didn’t do that.”

Green will return to Upton Park next weekend to take on former club West Ham along with other former players Rio Ferdinand and Gary O’Neill.

The former England international insists he is looking forward to returning.

“I had six great years there I loved it, loved every minute of it and moved on to a new challenge and I’m sure the day I left and walked out the door they moved on as well.”