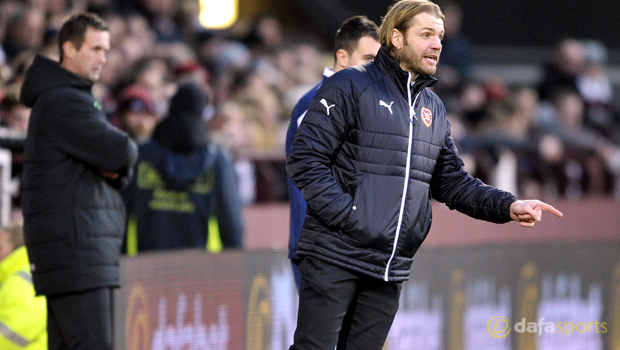 Third placed Hearts welcome Scottish Premiership leaders Celtic to Tynecastle on Sunday afternoon and the Jambos boss says he has been impressed with how the Norwegian handles the constant pressure of life in Glasgow’s notorious goldfish bowl.

“It is life as a manager and especially at the Old Firm,” said Neilson.

“There is always that constant pressure and I think Ronny has handled himself well. It is part and parcel of the job at big clubs like Celtic that there is always someone trying to put pressure on you.”

Deila finds himself under scrutiny after Motherwell consigned Celtic to a first home league defeat since February last Saturday.

That came hot on the heels of a disappointing European campaign that ended with Celtic finishing bottom of their Europa League group after they failed to qualify for the Champions League.

Ahead of their Tynecastle trip, Celtic lead the way on goal difference alone from Aberdeen, who drew 2-2 with Inverness Caledonian Thistle on Boxing Day.

Neilson says playing under pressure and scrutiny is something Celtic teams simply get used to and he doesn’t feel the heat has been turned up on the Hoops after the defeat against Motherwell.

“They will come with the same mentality as they always do, not matter if they have been beat the week before or they have not been beat.”