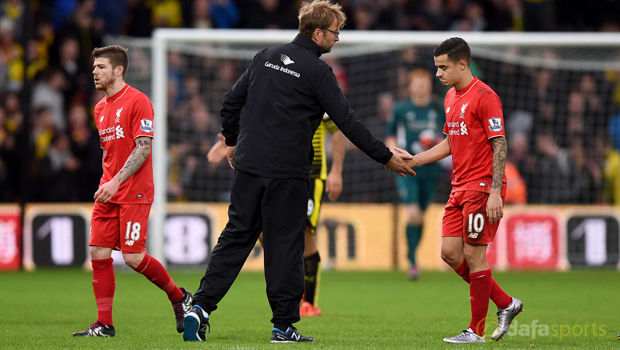 Liverpool attacking midfielder Philippe Coutinho is keen to win his first trophy with the club this season.

The Brazil international moved to Anfield in January 2013 from Inter Milan and has established himself as an integral part of the first team over the past couple of seasons.

The 23-year-old is, however, yet to win a trophy during his time with the Reds, but believes Jurgen Klopp’s side are well placed to challenge for glory during the current campaign.

He said: “We’re in a very good position. It’s the goal of everyone involved, we’re all focused on fighting for the trophies and I think we have a great chance in the competitions we’re in this year.”

The Reds have not won a trophy since they claimed success in the League Cup in 2012, but are in position to end that mini-drought, after reaching the last four of this season’s competition, while they are also still involved in the Europa League.

Coutinho believes victory in one of the cups would be the perfect way to round off what has been a successful three years on Merseyside.

He added: “We’re going to fight for that and I hope we win a trophy this year. [I’ve had] three wonderful years.

“As I’ve said, in the beginning I was given a very warm welcome, from the fans, the team, everyone who works here at the club.”

Liverpool are next in action on Boxing Day when they will play host to Premier League leaders Leicester and they are available at 1.95 to secure victory in the match, while the Foxes are on offer at 3.80 and the draw is priced at 3.75.