Revenge not an issue for Atletico Madrid midfielder Raul Garcia 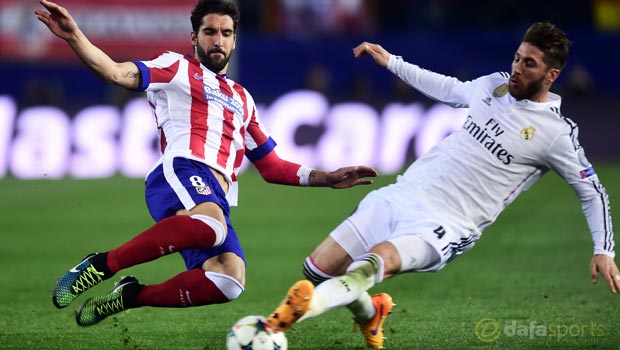 Raul Garcia insists his Atletico Madrid side will not be distracted by the chance to exact revenge on local rivals Real when they meet on Wednesday.

The pair are due to face each other again on Wednesday evening, with the victor going on to qualify for the last four of Europe’s biggest club competition.

Having played out a tense 0-0 draw last week at the Vicente Calderon, the tie is firmly in the balance and, despite being the away side, Los Colchoneros will be full of confidence heading into the clash.

The teams have met seven times already this season and Diego Simeone’s men are yet to taste defeat in any of those matches, a run that includes a victory at the Bernabeu back in September.

With so much bitterness between the pair in recent seasons, Atleti could be forgiven for being clouded by their desire to eliminate their rivals, but Garcia insists that will not be the case.

“We don’t live in the past,” the Spanish midfielder told AS. “Obviously we would have liked to win that final, but this is another duel, another season and we just think about that.

“The team is at an exceptional level and we’ll go with a positive mind-set to play at the Santiago Bernabeu.

“There is no need for any motivation to address these games. The fixture does that by itself. Every player lives for games like Wednesday’s.”

Despite Atletico’s strong record they are the current underdogs at 4.50, with the draw 3.40 and Real priced at 1.85.