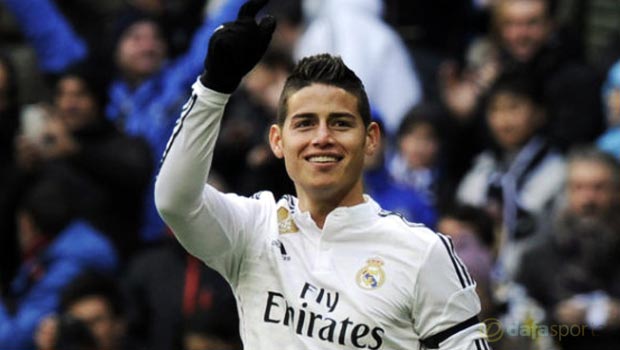 Real Madrid ace James Rodriguez has backed his side to win every game between now and the end of the season after returning to action following a foot injury.

The Colombia star was upbeat after making his return to action in a stunning 9-1 La Liga victory over Granada at the Bernabeu, a result which kept the men from Madrid hot on the heels of leaders Barcelona, who edged out Celta Vigo 1-0.

And Rodriguez has challenged his side to maintain the highest possible standards from now until June, with a Champions League quarter-final against city rivals Atletico next on the agenda.

He commented: “We’ve got what it takes to win the lot between now and the end of the season.

“Every match is important and the game against Atletico Madrid in the Champions League is going to be special as we want to beat them and win the competition.”

Real and Atletico met in the Champions League final last season, with Los Blancos winning 4-1 in Lisbon after extra-time, having been on the edge of defeat before Sergio Ramos equalised right at the end of normal time.

Meanwhile, the return of Rodriguez was hailed by Real head coach Carlo Ancelotti, who is clearly delighted to have another key man available for the final few weeks of the campaign.

The Italian added: “He played very well, it didn’t look as though he hadn’t played for two months.

“He showed his quality, his intensity and his ability to keep possession. He is a very direct player and always shows great vision and awareness.”

Real are 5.00 to win the Champions League again this season, with Atletico available at 19.00.