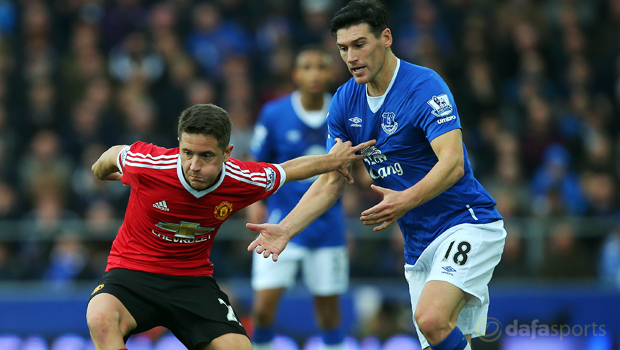 Everton midfielder Gareth Barry says the respect shown by Manchester United during their visit to Goodison Park last weekend may have been the home side’s undoing.

Louis van Gaal left winger Memphis Depay out of his team and instead opted to start Ander Herrera in midfield.

Barry says Everton were caught out and found it hard to regain possession from the visitors as a result.

He also feels United’s formation resulted in a more direct approach from the home team in a game they lost 3-0.

“They changed their team slightly by bringing Herrera in and leaving the winger out, which showed respect to us,” said Barry.

“But it made it tough to get the ball from back to front and we maybe had to go a little bit more direct because of it.”

Everton were hit with two goals in four minutes midway through the first period as the Red Devils took control of the contest.

The Toffees laid siege immediately after half-time but found David de Gea inspired in the visitors’ goal and former United skipper Wayne Rooney ended the game as a contest with a breakaway goal on the hour.

“We didn’t play well enough in the first half but we spoke at half-time about it being a big start to the second half,” added Barry.

“We managed to get the fans off their seats, we had a few chances and their goalkeeper has made a couple of good saves but unfortunately, they hit us on the counter and got a third which deflated us.”

Barry made his 550th career Premier League start against United and will want to get back on track at Arsenal on Saturday.

Everton are 13.00 to finish in the top four of the Premier League this season while Martinez’s side are 7.50 to win at the Emirates.