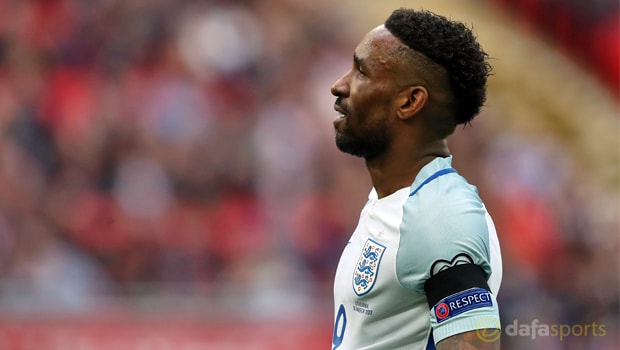 England manager Gareth Southgate insists there is no reason why a 35-year-old Jermain Defoe could not be part of a squad for next summer’s World Cup in Russia.

The Sunderland striker scored at Wembley on Sunday as England overcame Lithuania 2-0 to stay firmly on track for qualification.

The Three Lions now lead Group F by four points from Slovakia and Southgate says there is no pecking order in terms of which striker’s he selects in his squad.

Defoe continues to thrive for Sunderland and, should be doing so in a year’s time, the door remains very much open for the veteran forward to be in the travelling part if England are bound for Russia.

“I think we’ve got to look every time we get together as to who is in form,” Southgate said when asked if the striker was a realistic proposition.

“I don’t know if we can have a distinct pecking order because players that are playing well deserve the opportunity.

“If he is scoring goals in the Premier League and playing as well as he has this season, then there’s absolutely no reason why he couldn’t [go to the World Cup].”

The Lithuania game marked Defoe’s first appearance in an England shirt since November 2013 and he is likely to face competition from the likes of Harry Kane, Jamie Vardy, Daniel Sturridge, Wayne Rooney, Andy Carroll and Marcus Rashford for a spot in Southgate’s set-up going forward.

Vardy was also on target against Lithuania and the England boss says Defoe offered plenty during the current get-together as his side also lost a midweek friendly in Germany.

“I’m pleased for Defoe he got the goal,” said Southgate. “The bigger picture for us was his contribution throughout the camp.” England are 19.00 to win the World Cup in Russia in 2018.