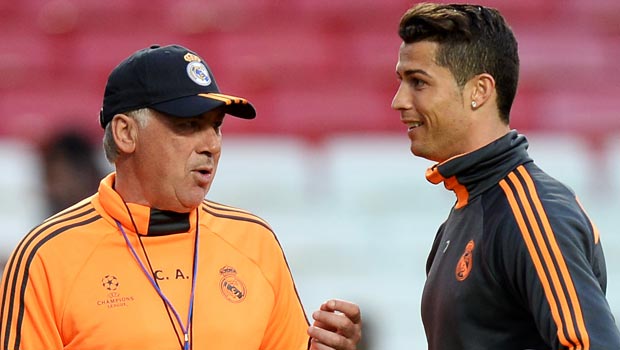 Real Madrid boss Carlo Ancelotti was determined to play down any suggestion of a rift behind Cristiano Ronaldo and Gareth Bale in the wake of his team’s 3-0 win over Espanyol at the Bernabeu.

Not for the first time, the Welshman’s single-mindedness appeared to provoke frustration in his Portuguese teammate.

With Real 2-0 ahead in the second half, Bale ran through on goal and, with defenders chasing, was left one-on-one against Espanyol keeper Kiko Casilla.

Rather than square the ball to Ronaldo, Bale toe-poked a shot wide much to the frustration of both the home fans and Ronaldo.

A similar incident occurred in last weekend’s defeat at Valencia with Bale opting not to pass to Karim Benzema and Ronaldo openly displaying his frustration.

Ancelotti says it is nothing out of the ordinary for an attacking player to be selfish in such situations.

“The fans wanted him to pass to Cristiano but forwards are determined to score when they are through on the goalkeeper,” the Italian said.

“Generosity is very important and if someone is being selfish then we will address it. The supporters are very demanding when it comes to the important players and Bale is one of those.”

However, Ancelotti was quick to dispel any notion the incident will have an effect on team spirit at the Bernabeu.

“We shouldn’t blow this out of proportion. It’s one moment in a football game,” he added.

“Relations between them (Bale and Ronaldo) and everyone are very good. We are all pursuing the same goal which is to lift Real Madrid as high as possible.”

Real Madrid are certainly expected to challenge for the top honours this season and are currently priced as 3.60 joint-favourites, alongside Bayern Munich, to retain the Champions League this season.