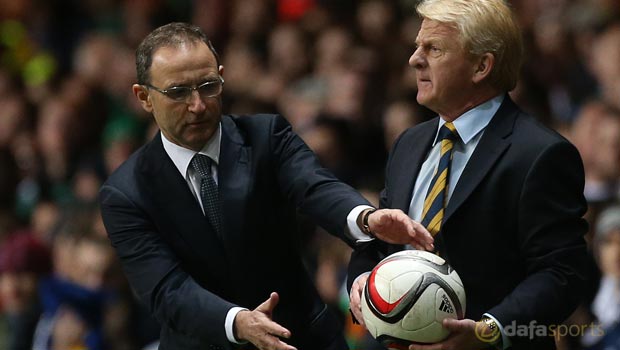 Former Celtic mangers Martin O’Neill and Gordon Strachan will have pride at stake when the Republic of Ireland face Scotland in Dublin on Saturday.

That is the view for ex-Celtic captain Tom Boyd, who played with Strachan for Scotland and under O’Neill at Celtic.

Scotland go into the Aviva Stadium clash with a two-point advantage over Ireland in Group D, thanks largely to a 1-0 win at Celtic Park back in November.

O’Neill has admitted that the game is a “must win” for his team and, according to Boyd, the two managers will be eager to seize the bragging rights.

“There is an edge to it, especially with both being successful Celtic managers in the past as well,” he said.

“Managers like to get the better of their peers, so that will certainly be an element, the bragging rights that come with that in terms of managers.”

Boyd looked back on his time playing under O’Neill in Glasgow and recalled the Ireland manager’s ability to engage the attention of a group of players.

“Whether or not it was the fact that he was a lawyer or not, I don’t know, but he can certainly command an audience of people and of players,” he added. “He could keep control, a controlled aggression.”

Republic of Ireland are 2.30 to defeat Scotland in Dublin, with Strachan’s team 3.30 to complete the double and the draw 3.00.

Boyd paid tribute to the job Strachan has done since taking over at Hampden Park, knowing victory in Dublin would put Scotland in prime position for a first major tournament finals appearance since the 1998 World Cup in France.

“I think there is a renewed enthusiasm about the (Scotland) team and there is a pride back in the performances,” he continued. “It’s not just about getting the results, which is vitally important, it’s the way the team is trying to play football under Gordon.”