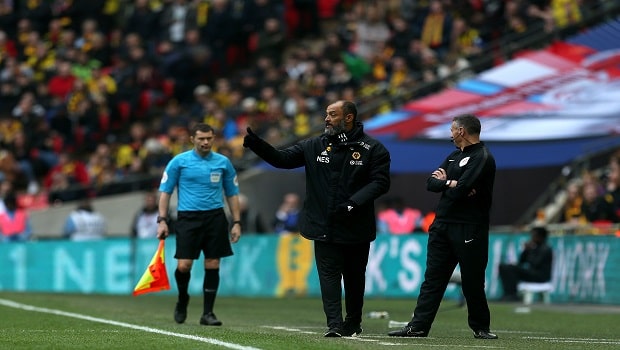 His side were firmly on course for their first FA Cup final since 1960 as they led through goals from Matt Doherty and Raul Jimenez in each half but they eventually succumbed in extra-time.

Substitute Gerard Deulofeu produced an exquisite goal 11 minutes from the end to give Watford hope and Hornets skipper Troy Deeney levelled from the penalty spot in stoppage time after he was felled in the box.

Deulofeu’s goal in the first period of extra-time proved the difference as Watford reached the FA Cup final for just the second time in their history.

The Wolves boss felt the game should have been managed better at the end of normal time, in order to protect their advantage. “It was an emotional game.

We had it, and it got away from us. It was a sad moment, we cannot hide it. Now it is disappointment and sadness,” Santo said. “When it comes to four minutes of injury time, we should have possession of the ball. We couldn’t handle that and we got punished.”

Sitting seventh in the Premier League, Wolves have enjoyed an excellent first season back amongst the big boys and their boss is challenging them to go again over the closing weeks of the season, despite the FA Cup disappointment.

“This is football, we must stand again, we have things to fight for, but I am very proud,” he added. “I honestly think we should have done better in the last moments of the game.”

Wolves are 2.88 to bounce back with victory at Southampton on Saturday in the league. Saints are 2.63 while the draw at St Mary’s is 3.10.