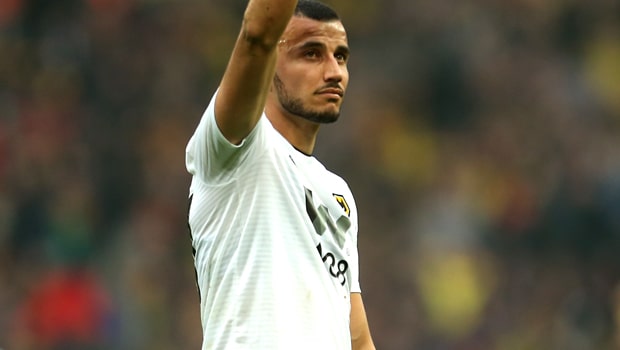 Wolves star Romain Saiss has been putting in the extra hours with manager Nuno Espirito Santo in order to feel fully comfortable in his recent position on the right side of defence.

Morocco international Saiss has predominantly played his career in the heart of midfield but, ever since the arrival of Nuno as manager, he has been deployed as part of a back three on numerous occasions.

The 29-year-old, who has been at Molineux since joining from Angers in 2016, has recently been playing on the right side of a back three, replacing Ryan Bennett, and he played there in the 3-2 FA Cup semi-final defeat to Watford last weekend at Wembley.

Although enjoying his time in the first team, Saiss admits it was initially difficult to get used to the different position, but he has been working hard to ensure he puts in good performances.

“At the beginning it was hard to adapt because it’s totally different in terms of body position when you play,” he said.

“I have spent a lot of time with the coach because sometimes I put my body on the wrong side, like I’m playing on the left side because that is where I play with Morocco.

“And when I get the ball I have to try and anticipate when the opponent is coming because they know if I am playing on the right side then most of the time I am going to use my left foot.

“They try to force me to go on my right foot so I need to used my right as well. I’m working on that every day.”

Saiss could retain his place for Monday’s Premier League encounter with Arsenal, who head into the clash on the back of a 2-0 Europa League win over Napoli, at Vicarage Road.

The Hornets, who are in the hunt for a seventh-place finish, are 3.20 to pick up the win, while a draw is priced at 3.75 and the Gunners are 2.20 favourites.